The Best Box Mod may not be a store bought one and may be one that you work on as a personal project. Lower on this page you will find some instructional videos about how to put together your own box mod.

Here are some of the best box mods with regulated currents. If you are new to box mods, scroll down to read more information on what they are and why there needed. 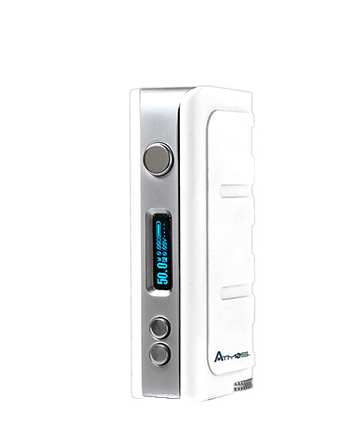 The i50TC-J is one of the best and easiest box mods to use. This is a temperature range setting box mod that uses a powerful 2600 mAh battery that can be charged with the included USB cable. View it here from Atmos.

The i150TC-J is a more powerful model than the one above.  If you are looking for  ahigher temerature option than this device is a good choice. This is a temperature range setting box mod that uses a powerful 2200 mAh battery that can be charged with the included USB cable. It reaches temperatures of 150W. View it here from Atmos.

Regulated box mods are the most popular vaporizer modification component used today, followed by vape tanks. A box mod is a fun way to get more involved in your vaping experience. Vape mods allow you to express yourself through the device you use. There are tons of different things you can do to customize your device. If you are looking for the best vape mods, we recommend giving AtmosRX a moment of your time. They have excellent customer service and affordable prices. Continue reading below to understand a few of the things that you are able to do with the best box mods.

Box mods can be purchased that give you temperature control features. Regulated box mods are able to help control the current of energy. So when you set a temperature, the box mod will not let your atomizer exceed the set temperature. Depending on the box mod you may be able to pre set multiple temperatures that you find work best. The box mod is able to stop heating the coil in your atomizer by reducing the amount of power being sent until the temperature falls back below your chosen mark.

What is a Variable Voltage Box Mod?

Another feature that many box mods possess is the option to create heat on demand. A variable voltage box mod is a feature where you can control the power when pressing a button. When the button is not being pressed there is no power or its slowly diminishing, and when pressed it heats back up. Regulate variable box mods are a good way to put the full control of the batteries life cycle in your own hands. Because you are in complete control of when energy is being used from it, you are better able to monitor your usage. This however does take practice and isn't for everybody.

When purchasing a box mod you will usually see a number that indicates the wattage of the device, like 200W, 100W, 75W etc. This number is showing you the maximum wattage level that can be generated from that particular device. 200W is pretty high and usually you will not need this much power while vaping. In fact most of the time 75W will be all you need.

One of the main reasons some people will chose a regulated variable voltage box mod is due to the ability to switch out atomizers quickly that don't have the same resistance levels.

If you are not a gadget savvy person and would like to vape using devices that are more customizable than the full package brand vaporizers, regulated box mods are a safe choice. Using a regulated box mod over a mechanical box mod is kind of like comparing turning on your car with a remote starter and turning it on with jumper cables. There is a bit of a learning curve and a bit higher chance of injury.

Regulated box mods are safer because they regulate the current of your device and act as a stopper when the heat reaches a certain point. Regulated mods have features that prevent overheating and also the ability to short circuit itself as a protective measure to help from exploding. Additionally regulated box mods can have reverse polarity functionality that shows you when you insert the batter the wrong way.

Regulated box mods can also include an overcharge protection feature as well as a minimum and maximum resistance level. These are used to prevent the mod and atomizer from firing when your the resistance is too high or low. To be on the safe side if you don't fully understand and feel confident on vape mods, you should stick with a regulated one. The best box mod options and the safest ones come from reputable companies that have a proven track record of creating safe products.

If you re interested in knowing more about mechanical unregulated box mods you can do so by visiting our section on them here.

Box mods can come in two different ways in regards to how the batteries work with the device. Many regulated box mods will have external batteries, meaning that you can take the battery our and put in another while the other is charging. The other type of battery implementation is a built in rechargeable battery. The built in battery mod can be charge with an ac adapter or usb cable.

Depending on your end game both battery options can be good. If you are set on using just one device and don't mind having to wait for it to charge between uses than the internal rechargeable option will be just fine. There are less components to take care of and you won't end up losing a battery. On the other hand, if you are looking to purchase multiple vape mods and interchange components than external batteries will be a smarter option. External batteries allow you to get multiple devices that can use the same sized batteries. External batteries also gives you the option to bring extra's around with you in case one dies. If you run out of juice with one battery you simply pop in another and you are good to go. A downfall of the external battery is monitoring its charge, you leave yourself more vulnerable to over charging or doing something wrong.

Is a Mod All You Need to Vape?

Once you have narrowed in on the type of box mod you like you will be required to choose a few other items that will together create your own custom vaping device. Other than the box mod you will need to get a vape tank and an atomizer.

Vape tanks can be a bit tough to wrap your head around. If you need a bit more clarification on vape tanks, atomizers, cartomizers, clearomizers, RTA's and RDA's we have an educational vape tank system article here.

The easy option, if choosing all your own components sounds a bit confusing, is to purchase one of the best vape mod starter kits. This way you will have a complete set and than from that point on you can start testing individual components. This is a smart route to take and will allow you to get better acquainted with how everything works. Check out the best box mod starter kits ﻿﻿her﻿﻿e.

This next section will not be for everyone and caters to those who are technology inclined and like to build there own gadgets. Please be very careful if you decide to go forward with building your own regulated or mechanical box mod. We will just be listing a tutorial training video that you will go over the actual steps to build the device. You should work with a skilled manufacturing team that has done this before or people who have experience with these types of components. Remember if you do not know what you’re doing there is a chance that you can get hurt. Hooking up things directly to a power source can be dangerous and proper steps need to be followed and safety equipment worn. If you do attempt to build your own regulated or mechanical box mod that you take your time and listen and follow the steps of professionals.

If you are looking to build your own DNA box mod here is a good place to learn some of the steps that will be required. The best box mod for you could be one that you are able to customize yourself. A DNA box mod is one that has temperature controls and is pretty simple in terms of parts and components.

Ok lets see a tutorial on you how to build your own DNA box mod (best box mod tutorial). The best thing about constructing your very own DNA box mod system is that you can customize it to your preferences and make it truly unique.

What you are about to watch is a complete DNA box mod tutorial. If you have all the parts and follow all the instructions you will be building a box mod with all the same features that store bought DNA device come with.